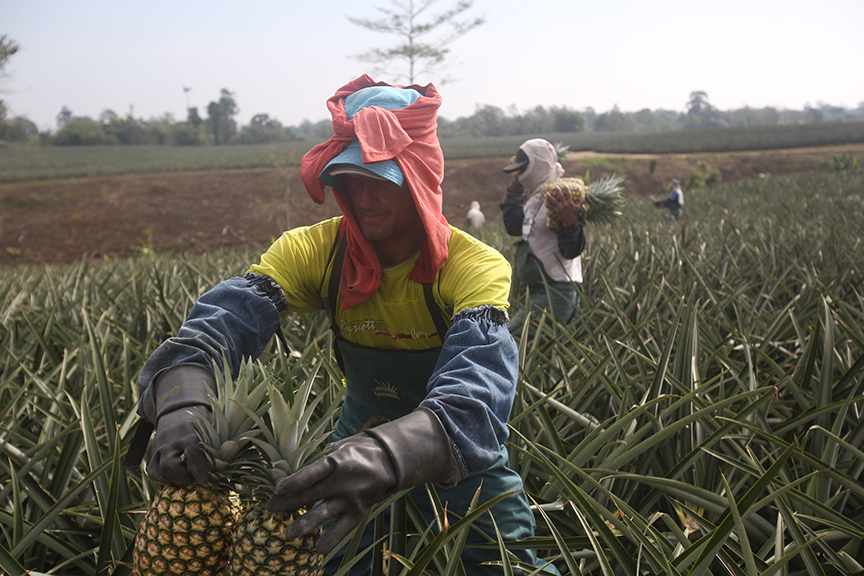 In Santo Domingo de los Colorados, Ecuador, medium and large companies produce tropical fruits such as pineapples for local and international markets. Most of them are grown as monocultures. They represent a source of income and food for families in the area. Photo by Karla Gachet.

In very broad terms, the sustainability discourse builds on the assumption that we live in a closed environment and that, due mainly to human activities, environmental “goods” – that are services (such as clean air/water and rich soil) and resources (such as food and biodiversity) that we get from the natural environment – are limited.

Because our existence depends upon such a closed environment and natural resources are being increasingly depleted, ensuring that the resources we need to live are not exhausted becomes crucial.

So, in simple words, sustainability means that there is enough for everyone to survive today and in the future.

But, how do we reach sustainability?

For this reason, it’s very important – and indeed a matter of justice – to balance access to contested resources equitably between competing appropriators, today and tomorrow.

So, what does sustainability have to do with justice?

There exist different notions of sustainability and they all intersect, among others, with distributive justice concerns.

For instance, rural communities have an interest in preserving soil quality and biodiversity for agricultural purposes which competes with urban communities’ conflicting interest in increasing the availability of biofuels. Some developed countries – most notably, the European Union countries – have recently grown concerns about carbon emissions’ impact on the climate and have subsequently committed to reduce emissions levels. On the contrary, developing countries affirm their “right to growth” by emitting as much as developed countries have done so far.

In this respect, environmental protection is very much related to the problem of access to environmental goods which are limited in number and highly exhaustible (considering, for instance, soil in the example above).

Sustainability is a matter of environmental justice.

From an inter-generational perspective (which looks at the relationship between current and future generations), justice considerations recommend that the current human development does not deplete the Earth resources, such as water, nourishing food and clean air, to such an extent that future generations will not be able to satisfy their needs.

Some sustain though that it is hard to tell what the future generations’ needs will be.

Depending on what notion of sustainability we choose, it may be deemed fair that present generations commit themselves, not only to avoid depletion beyond a certain extent, but also to actively preserve the integrity of the natural environment as they have inherited it.

After all, all approaches to sustainability are to some extent concerned about the well-being of future generations.

However, as said, the answer to the question what specifically should be the posterity’s inheritance may vary a lot.

In the nineteen seventies, economists and shallow environmentalists sustained that future generations should (just) be ensured the means to satisfy their needs: hence they assume that technology will ensure that there will always be enough resources to meet human needs.

In the nineteen nineties, by contrast, ecological sustainability theorists argued that future generations will require well-functioning ecosystems and sufficient resources.

But what does this all mean?

Let me explain these concepts with some good examples of combined inter- and intra-generational…injustice.

Environmental justice prescribes that environmental wrongs, such as waste, water discharges or air emissions, are borne by the communities who determined them: polluter pays.

So, for instance, in Italy, waste law prescribes that urban waste which cannot be recycled is disposed of (e.g. landfilled) in the same region where it was produced. There are not such constraints when urban waste is being recovered in waste recycling facilities or in waste-to-energy incineration plants: however, because in southern Italy there is just one such incinerator, northern Italy citizens often blame their public administrations as they grant permits for the construction of new incinerators that are believed to burn waste that was largely produced in the south.

This is not just a NIMBY phenomenon (Not In My Back Yard): differential waste-related exposure is in fact seen as a form of environmental inequality.

Likewise, waste dumping across national boundaries, notably from the industrialized world to emerging economies, is perceived as an environmental inequality. As a matter of fact, in the past twenty years, industrialized countries’ pollution control regimes have become stricter, costs associated with compliance with environmental obligations have significantly increased and notably waste treatment services have subsequently become more expensive.

Today the landfill of Agbogbloshie (Accra) in Ghana is one of the largest landfill sites in the world. Assuming that the type of waste it assembles originated in Ghana would be blind optimism.

However, the environmental wrongs produced by this landfill – such as methane emissions, groundwater contamination, landscape intrusion – are, and will be, unfairly borne by current and future Ghanaian communities living nearby.

In both examples, communities living near these waste treatment facilities bear the consequences of waste produced by someone else, today and for the years to come. This is unfair both under an inter- and intra-generational perspective.

Another interesting example embodying both perspectives is provided by the implementation of a principle known at the international level as “common but differentiated responsibilities” and introduced by the Kyoto Protocol. This principle imposes different climate change mitigation responsibilities upon developed, on one side, and developing countries, on the other side, on the assumption that, given their longer industrialization history, developed countries have contributed to climate change to a larger extend than developing countries.

However, some developing countries’ carbon emissions levels have significantly grown in the past ten years and the principle of “common but differentiated responsibilities” has subsequently started to shake, together with the Kyoto Protocol and the UNFCCC’s COP system (United Nations Framework Convention on Climate Change, Conference of the Parties).

I hope it is clear now that sustainability is a matter of environmental justice and different perceptions about what is fair and just for present and for future generations shape different notions of sustainability.

Access to environmental resources, such as water, genuine food and clean air, was not felt by these communities as being fairly distributed between people of different ethnicity, income and class.

It is worthwhile to recall in this regard that one of the first actions that the Black Panthers movement took was serving free breakfast to black children before they went to school in Kansas City in 1969. Meaning that food is an environmental resource that should be provided to all equally!

Nowadays, the Fridays for Future movement, the IPCC reports, some piece of environmental legislation introduced, for instance, by the European Union all show that environmental justice is slowly discarding the former social justice approach (which, to be honest, sometimes could be just perceived as “the peripheries’ NIMBY”), to pursue broader ecological priorities.

We acquired more information about the many different impacts of our activities on the environment. We acknowledged that environmental problems are fundamentally rooted in human activities.

All human activities, due notably to the current patterns of economic development and the way human populations produce, consume and organize to satisfy their needs, have an impact on nature.

Hence, it is fair and just to ensure the long-term integrity of the natural environment today and tomorrow and, in order to do this, access to, and use of natural resources need to be equitably regulated.

In the next post, I will discuss some examples that help to exhibit this move from the social focus to the ecological focus in Lombardia (northern Italy) and Milan, the region and city where I live. Stay tuned!