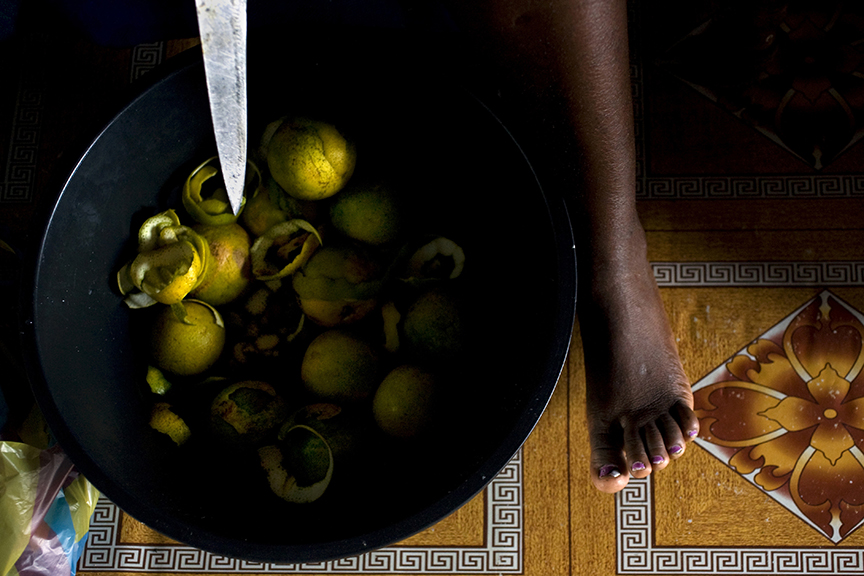 A woman uses a knife to peel potatoes at her home on the island of Limones, on the Ecuadorian coast, province of Esmeraldas. Most families have many children and many don’t have the means to support them. Photo by Karla Gachet. The link to the full story of the cover photo can be found at the end of the article.

One third of the food produced for human consumption is lost or wasted every year (FAOs estimation (Food and Agriculture Organization of the United Nations)). This is approximately 1.3 billion tonnes, an average of 265 Kg/person/year and 750 billion US dollars per year (equivalent to the GDP of Switzerland).1,2

With the food produced and not consumed (wastage) today, we could eradicate hunger!3

How does this happen?

As mentioned in post 2, to produce food we need: essential elements that form all living organisms (carbon, hydrogen, oxygen and nitrogen), water, soil and biodiversity.

If we think about it, the food production itself is consuming a lot of natural resources, right?

Food production not only requires natural resources, but also energy for postharvest handling and storage, processing and distribution up to consumption. Now imagine if we do not consume this food, how big would the wastage be? How can this impact, this footprint, be measured?

The Environmental Footprint of Wastage

Just to make it clear, the famous “environmental food footprint” is the energy and resources required to produce food and is evaluated using four indicators: the carbon footprint, the blue water footprint, land occupation and the impact on biodiversity.1,2

Now, in the picture below, you can see some really impactful numbers which demonstrate how large the food footprint of wastage is. To highlight some of these numbers, imagine a person riding in a car for 2.300 Km every year (almost the distance between New York and Las Vegas). This is the approximate carbon footprint of one person; or 3x the volume of water of Lake Geneva. This is the water consumed to produce food wastage in the world (the blue water footprint) per year; or in terms of land use, we can attribute it an area that corresponds to the size between Russia and Canada, approximately 28% of the total world area!1,2

The equivalent of 6 garbage trucks of edible food is lost or wasted every second!4

Food with the Highest Environmental Impact on Food Wastage

To identify the impacts of food wastage on natural resources and where and why these impacts occur, FAO has grouped food in eight food commodities:

The study shows that cereals and vegetables have the greatest environmental impact for the carbon footprint, the blue water indicator and the land occupation accounting for around 50% in all cases.1,2

Regions with the Highest Environmental Impact on Food Wastage

As already mentioned in post 2, farming (conversion of wild lands and intensification) is the major threat to biodiversity globally. It is important to note that this occurs mostly in developing regions (72% and 34% of species are threatened by crops and livestock production, respectively, versus 44% and 21% occurring in developed countries). Deforestation due to agricultural expansion occurs mainly in tropical and subtropical regions of Africa (62%), Latin America (25%) and Asia (13%)1,2 and has destroyed 5.2 million Ha/year between 2000 and 2010 (the net annual loss of forest equivalent to an area about the size of Costa Rica)5.

In financial terms, the food wastage with greater economic impact are vegetables and meat accounting for around 170 and 160 billion US dollars per year, respectively. 1,2

In order to compare the impact by region, FAO has also divided the world into seven regions with similar food cultural behavior, economic and social backgrounds, which are shown in the figure bellow1,2:

Remarkably, the regions of North America & Oceania, Industrialized Asia and Europe have the highest per capita carbon footprint of food wastage (903, 741 and 686 Kg of CO2 eq./person/year, respectively).1,2

As you can see, wastage of cereals and vegetables have the most significant environmental impact resulting in the highest global footprint of carbon, water and land occupation.

So, why do we let all of these important natural resources get lost? To answer this question, let’s have a look the following graphic that explains the life cycle of food and the sources of food wastage.

As you can see, food is lost along the entire food supply (agricultural production + postharvest handling and storage = 54% and processing + distribution + consumption = 46%). The later the phase of the life cycle, the greater the impact due to its unnecessary production and transformation.1,2

If we throw away an apple pie, its environmental footprint will be higher than to waste the apples collected at the field, right?

How and Why Food is Being Lost

The food losses are mainly caused by inefficiencies in the food supply chains (such as poor infrastructure and logistics, absence of technology, insufficient skills, knowledge and management capacity and lack of access to markets) and natural disasters. 1,2

On the other hand, food waste is caused by spoilage of food (food kept beyond its expiry date or left to spoil) and oversupply due to markets, or individual consumer shopping or eating habits. The food waste is the food appropriate for human consumption that is being discarded. Within the food life cycle, food waste refers to processing (stage 3), distribution (stage 4) and consumption (stage 5).1,2 Each one of us can do something to improve food waste.

Now, we should know that the food wastage is different depending on the region. Developing countries suffer more food losses during agricultural production. However, food losses during agricultural production (stage 1) and postharvest handling and storage (stage 2) are similar in all regions in the world accounting for approximately one third of the food wastage of each region. Meanwhile, in mid- and high-income regions, the food wasted tends to be greater at consumption level. In fact, food wasted during processing (stage 3), distribution (stage 4) and consumption (stage 5) represents 31-39% in mid- and high-income regions while in low-income regions accounts only 4-16%.1,2

Another important point to consider when talking about food wastage is the so-called “ugly food” mostly referring to fruits and vegetables, but also animal parts. Only for aesthetic reason, markets and people prefer consuming “beautiful and impeccable” produce and as a consequence, huge amounts of “perfect food” is being thrown away!

Each region of the world has its own profile in terms of food wastage (quantities and type of product). In the figure below we can see some numbers:1,2

Interestingly, Industrialized Asia food wastage is lower in percentage than other high-income regions. The high wastage volume is because this region dominates the world vegetables production and consumption, with more than 50% of both.

Also keep in mind that in Asia today is where 60% of the population lives!

In Sub-Saharan Africa region, the high wastage of starchy roots at a global level is because of high volumes of losses in the agricultural and post-harvest phases (stages 1 and 2).1,2

These big numbers in South & Southeast Asia and Africa, also represent the food that is being wasted due to the lack of proper storage possibilities. To address this needs, Evaptainers and Wakati are building innovative cooling systems. It’s worth checking them out!

As we can see, in each region of the world the problem of wastage considers many factors and is different for each region!

Food wastage is a serious problem for which we are all responsible. Our consumer footprint has an impact. Our food is connected with the earth, the watersheds, the climate and the people who produce the food we eat. Only by becoming aware of our contribution will we have the right tools to make decisions that will allow us to build a sustainable world.

Around the world there are local movements using different strategies to fight food waste. Here there are several examples:

Food for Soul, born in Italy, is one we love. Their approach involves chefs and their knowledge to transform ordinary ingredients (surpluses of food that otherwise will be wasted) into extraordinary dishes that will be served to the poorest, fighting like this against food waste while promoting social inclusion. You will probably think that this kind of strategy would only work in developed countries however, one of these centers Gastromotiva, is running in Rio de Janeiro, Brazil.

Stop Wasting Food is a Danish movement, that started by raising consumer awareness and in 5 years it has become the largest non-profit consumer movement against food waste in the world. They teamed up with the country’s biggest low-cost supermarket chain to replace all quantity discounts with single item discounts to minimize food waste, promote the opening of food surplus supermarkets, outreach programs to the homeless, and with a greater focus is involving the industry, retailers, canteens, restaurants and foodservices in the fight against food waste. Many practical tips to reduce food waste can be found on their website. It is really worth checking them out!

France is taking action at a political level and has passed a law forbidding supermarkets’ food waste. Food needs to be redistributed/donated before it goes bad, otherwise supermarkets will get fines.

Costa Rica is also taking action at a political level with a well-structured plan of action; have a look here.

Involving the community, the movement Re-food in Portugal, is collecting the surpluses from restaurants and with the help of volunteers, taking them to people in need.

Involved supermarket Chowberry in Nigeria has created a new sustainable food chain out of products approaching end of shelf-life allowing consumers to see their availability and discounted prices in real-time. This discounted food is obtained by charities and NGOs helping tackle food poverty.

In most countries of Latin America, non-profit organizations known as Banco de Alimentos are collecting food that, for various reasons, would be discarded. Just type on google: banco de alimentos + “country name” to find them.

If we think about it, in Latin America and the Caribbean for example, with the food that is being lost only in terms of retailing (supermarkets, street markets, shops and small retail) more than 30 million people, that represents 64% of people suffering from hunger in the region, could be fed.6

We do have the power as consumers!

We can buy only what we can eat, store and eat our leftovers, think that more is not always better by preferring quality over quantity, share surplus food and at restaurants, order only what you can eat and if you can’t finish your meal, take the leftovers home.

We can also choose to buy that apple that does not have the nicest color, that broccoli that has a weird shape, and by doing this you will be, nice and slowly, pressuring the system to change this rule that tells what kind of vegetables and fruits can be sold at the market, otherwise it goes to the trash (wastage). Also keep in mind also that the fruit with the little holes from the worms might be the most delicious. Nature recognizes food quality much better than we do. And that the perfect shape pear might have been treated so that it remains as perfect as you want it…

To help decrease the numbers from food wastage relating to non-consumption, you can use all of the parts of the produce you buy, the leaves of the carrots and the stem of the broccoli can help to make a rich vegetable broth for example. By doing so, you can always eat everything you buy! It is that simple.

And remember that “nature does not waste anything”. Let’s start thinking about waste as resources and build a new economy, a circular one. Take a look at Ellen Macarthur Report, Drawdown and ZERI and get inspired.