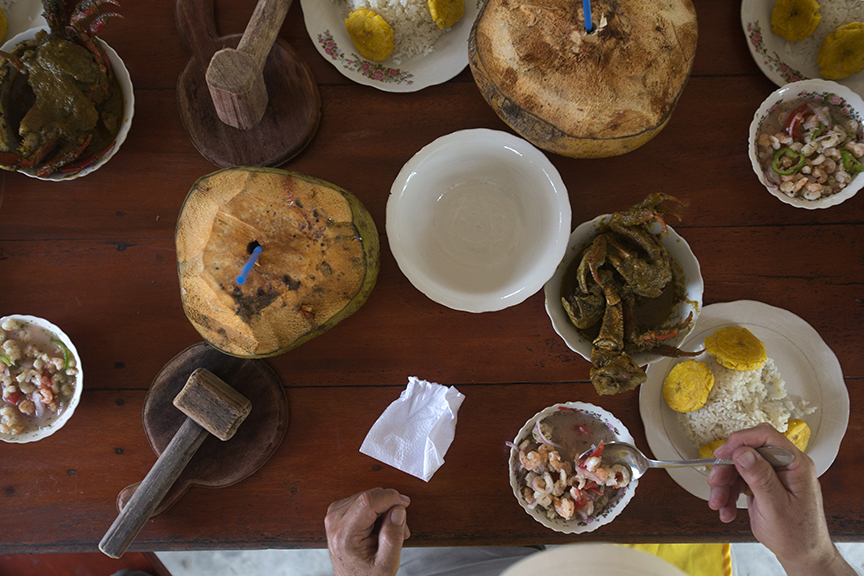 The Vuelta Larga community in the canton of Rioverde in the province of Esmeraldas, Ecuador, consists of about 56 families that work mainly in agriculture, fishing and the industry of a coconut sweet known as “cocada”. On the table the “blue crabs and shrimps ceviche” (cold seafood soup) is served, accompanied by banana chips (patacones), rice and fresh coconut water. The restaurant is part of a community initiative that, with the support of several organizations, are moving forward. Photo by Karla Gachet. The link to this initiative can be found at the end of the article.

One of the greatest feats of our time is to guarantee the food security on the planet. According to FAO (Food and Agriculture Organization of the United Nations):

“Food security exists when all people, at all times, have physical, social and economic access to sufficient, safe and nutritious food which meets their dietary needs and food preferences for an active and healthy life.1“

Human population continues to grow, especially in developing countries, and in 2050 9 billion people will populate the earth. How to feed 9 billion people is generating commotion not only regarding the need of producing more and “better” but also when addressing awareness about food waste and unequal food distribution.2

The figure below shows how the population increased during the past 65 years and the projections for 2050.3

As you can see in the figure, in proportion, the European population seems to decrease (but in truth it remains steady from 2000 to 2050) while the population in Africa is increasing more than 10x when comparing 1950 to 2050.

The rest of the continents do not show drastic variations in proportion. However, the population in Latin America and Oceania will increase more than 4x, Asia almost 4x and North America more than 2x (global increase almost 4x) by 2050.3

Yes, huge numbers! So, how are we going to feed all those people? And what does it really mean?

The following videos (available in English with  subtitles in many languages) by Denis van Waerebeke  and the organization Feeding9billion clearly show the difficulties of feeding the growing population and how we can be part of the solution. Really worth watching!

But how do people eat?

Human diet is as diverse as are people and cultures around the world. There is no “ideal diet”, but there are ideal diets depending on the geographical location and the conditions of each region that provide the energy required to enjoy a healthy life.

There is an overall knowledge that a regular person should consume 2000 dietary calories or kilocalories per day (energy requirement). However, we did not find scientific proof explaining the calculation. If you find any, please let us know on the comments.

Photographer Gregg Segal shows nicely in his project Daily Bread, what kids around the world are eating allowing us to see not only how diverse food culture around the world is, but also the health value of home cooked meals in contrast to junk/processed food. Great pictures indeed!

It is very important to maintain cultural diversity (and diversity in general)! Imagine if we all eat the same things. It would be disturbing and also unsustainable! On this regard, the organization Slow Food, promotes the preservation of culinary traditions and the farming of local plants, seeds and animals. They are a global movement which acts locally. This is a great one to support!

National Geographic6, using FAO information7, shows in simple illustrative graphics the consumption patterns of 22 countries around the world and how these have changed over a span of 50 years. On a global scale, between 1961 and 2011, the consumption of produce (roots with high starch content, vegetable and fruits), meat products and sugars/fats have increased. The figure below shows the world`s average daily consumption in both calories (cal) and grams (g).6

It is evident that a small portion of grain (e.g. 351 g) generates a lot of energy (1085 cal) and that a large amount of produce (488 g) generates little energy (270 cal).6 Please keep in mind that energy, in this case referred to as calories, does not mean “weight gain”. Energy is vital! You should be more concerned about the quality of the calories and to have a balanced diet rather than worrying about the number of calories itself. In the figure, we show the relation between calories and grams consumed daily per person6 in order to associate them later on with the food itself.

The figure bellow presents a better view of the impact of food consumption in China, India, USA, Brazil, Japan and Somalia in years 1961 and 2011.6

Interestingly, China not only increased almost 4x the amount of food consumption between 1961 and 2011, but also increased more than 10x the amount of meat consumption.6 If we think about this and the increase in population, we can imagine the impact on food security (China is just one example).

It is evident that the complexity of food security increases with increasing prosperity in the world. China and India, which are driving an increased demand for food, especially meat, eggs and dairy products,6 subsequently increasing the pressure to produce more maize and soybeans to feed cattle, pigs and poultry.

This change in habits (specially the increased demand for animal derived products) is also evident in emerging economies all around the world. If we think about it, Brazil, for example, has more than tripled (3x) this meat production in 50 years. Other examples can be found in the National Geographic study.6

If these trends continue, the impact of population growth and diets with a greater animal component will require doubling agricultural production by 2050.

Worth reading on this regard is the Five-step plan to Feed the World proposed by National Geographic.

It is also alarming to think about the excessive and indiscriminate exploitation of the oceans to meet the needs of emerging economies. China, for example, has recently been involved in massive, non-selective and illegal fishing events in Senegal8, Ecuador9 and other Pacific countries10.

A recent study in West Africa shows that illegal fishing accounts for 65% of reported catches which puts food security and the region’s economy at risk.11

But what exactly does this mean for the local people?

An interesting approach to fight against intensive fishing is the European project Fish Forward. The project aims to raise awareness about the social and environmental impact of fish consumption. It targets consumers and their willingness to contribute in changing this situation by choosing to buy sustainable fish.

The way we consume food is endangering biodiversity and human health. A new regenerative food system model it is required, a circular one.12

The problem of the food in the world is complex, it affects all the inhabitants of the earth. It does not require a single hero or a magic formula, it requires the work and creativity of each one of us. Together we can solve it and build a healthy and fair world with food for all.

If you want to be part of this movement, stay tuned! We are going to talk a lot about the food problems in the world, how we can be part of the solution and the initiatives that are contributing to a better world.

2 thoughts on “Food for all: mission impossible?”