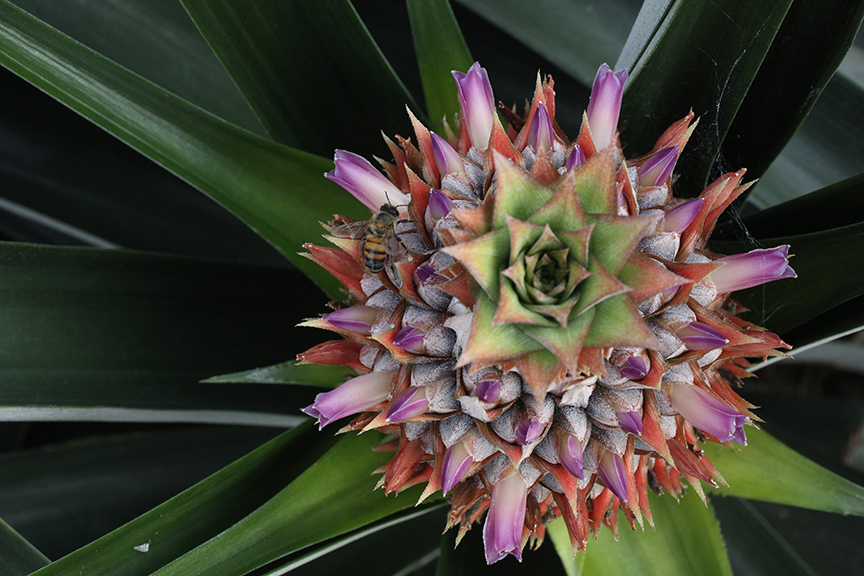 A bee perches on a pineapple plant in a plantation in Santo Domingo de los Colorados, Ecuador. Here, medium and large companies produce tropical fruits such as pineapples for local and international markets. Most of them are grown as monocultures. They represent a source of income and food for families in the area. Photo by Karla Gachet.

What is a beekeeper doing in downtown Milan?

It’s a Monday in late March, it’s warm. In the Segantini Park, among the trees within the naturalist area, green with the first shoots of spring, a group of volunteers closely follows Luciano Mazzola who has brought four beehives.

Two families will produce honey, and the other two will also serve to monitor air quality, which will be carried out thanks to the collaboration with researchers from the Catholic University of Piacenza.

The Project is call BeeResponsible and is financed by Dyson, a company that has found a smart way of doing corporate social activity.

A small group of interested people will follow a course with Luciano and will accompany him during the care visits to the hives. If everything goes well, at the end of this experimentation year, the hives will stay at the Segantini park. Here, it will be possible to taste the honey from the flowers of the park and also from the balconies of the Milanese people.

Bees feed on flowers within a radius of 3 km, so anyone with a flower on their balcony can help feed these fascinating creatures that, in addition to producing honey, pollinate plants better than any other insect.

Once the hives have been moved, the group moves under the pergola of one of the vegetable gardens within the park to listen to the first of a series of lessons on the life of bees and the management of a hive. The age of the people in the audience is diverse. There is even a child who ask his mother whenever he does not understand. He feels that something important is being talked about.

Did you know, for example, that in 2018 Europe banned neonicotinoids pesticides widely used in agriculture that also kill bees? Therefore, we hope to see more beehives in the Po Valley.

Luciano explains that during their evolutionary path, bees have learned to communicate to their mates the location of the flowers thanks to a “dance” in which they explain the direction and distance of the feast. Bees are orientated with the position of the sun. You can find many videos on YouTube that explain and interpret this “dance”.

We also discovered that, in their two months of life, the bees carry out a rotation of the work of the hive: in the first weeks, they perform domestic tasks of cleaning and caring for the eggs, then the guard of the door, and finally, when they are mature and well trained to smells, they go out to look for nectar from flower to flower.

The queen, on the other hand, lives up to five years and, after the nuptial flight in which she is impregnated by a dozen drones (who die after the act), she lays eggs throughout her life.

People that have sweet tooth for honey will be interested to know that some jars sold at very low prices may contain something other than honey. In fact, for honey to be considered as such, must be produced by bees that pass the nectar from mouth to mouth in a practice called trophallaxis that enriches the nectar with enzymes that also allow bees that do not leave the hive to feed.

Other fan bees will help reduce the moisture of the nectar below 18% to turn it into honey, a food that can be stored for a long time.

In other parts of the world, it is allowed to collect nectar from hives and transform it into honey in factories with the addition of sugar, which for obvious reasons produces a much less nutritious and balanced food.

The subspecies raised in Italy is called the ligustica bee and is known around the world for being gentle and non-aggressive, so don’t be afraid of them.

Before leaving us, Luciano recommended a book: “The Buzz about Bees” by Jürgen Tautz that combines a practical approach with a more philosophical one accompanied by beautiful photos.

The meeting is over. It is sunset and we leave with a feeling of harmony and interconnection between us, the bees and the flowers. Tonight at home we will look at the flower on the balcony with new eyes. We will know that we are involved in the world of bees and that we collaborate with them in the dissemination of plants and the health of the planet.

This is the first of a series of posts where we will talk about bees, stay tuned!