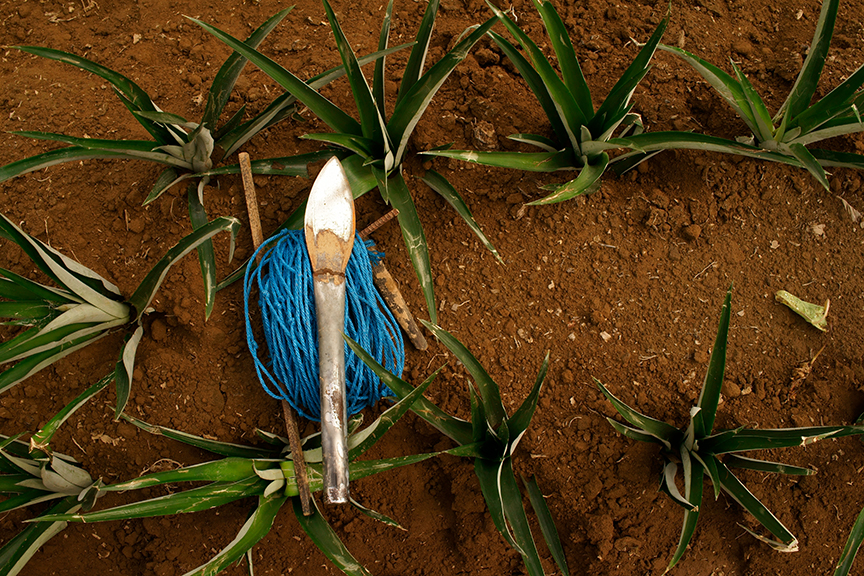 Freshly transplanted pineapple plants in a plantation in Santo Domingo de los Colorados, Ecuador. Here, medium and large companies produce tropical fruits such as pineapples for local and international markets. Most of them are grown as monocultures. They represent a source of income and food for families in the area. Photo by Karla Gachet.

A curious man enters one of the orchards of the Segantini Park and finds Sergio and Luca. He’s Junior, a young man who is passionate about the land and eager to know how we grow plants in the park, and why? He also works the land there and, because of the pandemic, he has been trying to do it for a living since last year. He tells us that he has not studied agriculture, that he learned the basics in his native Cuba where all the children and young people cultivate the land after school, “I work hard for a child,” he tells us.

Sergio and Luca show Junior our worm compost that has been working for the past two years. Depending on the time of year, the compost is made in a period between 3 and 6 months. Junior tells us that it could be more efficient and, if we want, he can show us how to do it. Salomé, who is very interested in home composting, gets involved and immediately organizes a visit to Gaggiano where Junior works.

To Gaggiano by bike to make earth

It was a Sunday with good weather at the beginning of May when 5 people, Francesca, Nicolò, Enrico, Ivana and Salomé, arrived by bike at the garden center where Junior works.

We met Junior, who welcomed us with enthusiasm and immediately showed us how the orchard/plant garden works. In the orchard, Junior grows a wide variety of vegetables that are disappearing. Due to globalization, food diversity is in danger. Fortunately, there are people like Junior working to recover it.

His way of cultivating not only has a practical approach, a synergistic garden in full respect for nature and relationships with various organisms, but it is also a philosophy of life! His garden highlights the importance of mother earth as well as a non-consumeristic lifestyle that values relationships.

Junior told us that when he arrived in Lombardy, he wondered what he could offer that land and that particular place. He saw that in the vicinity there were rice fields and a rice factory that produced the bran of the grains as a waste product. As he later pointed out, bran is an important ingredient in his compost. Also nearby, Junior has access to cows from which he takes manure as well as pieces of wood from the trees that border the vivarium, both of which are the ideal substrates for decomposing microorganisms.

Another way to compost

Let’s get to work, first we collect all the ingredients we would need:

* The microorganisms can be found at the base of large trees, just below the first layer of soil. They are like thin white cobwebs. In the absence of these, you can find pre-packed, ready-to-use microorganisms for purchase. In Italy, for example, there is a product called Top Crop from Microvita.

When we went to collect the ingredients, we observed the land around the garden center. Many rice fields were not yet productive but instead were dry land waiting to be fertilized and irrigated.

We start by making a small fire that will be completely covered with the rice bran and will slowly burn until it becomes active black carbon (charcoal), rich in minerals. The bran burns slowly and, little by little, we add more bran that strangely does not produce a flame, but instead, a delicious smell.

Meanwhile, on the ground, we draw a circle of 1 meter in diameter. Junior explained that a good compost should be as high as the circumference of its base (1 meter).

While we waited for the rice bran to burn, we went to eat a delicious barbecue with friends.

When we return, we proceed to arrange the layers to create the compost pile:

We start with the straw, then the shredded grass, then the pieces of bark with microorganisms, a little cow manure (NB: for a compost in the city, raw leftovers found in the kitchen can also be used (just remember not to use meat products as this may attract rats and/or other rodents) and a good stream of water.

The proportion of ingredients is 3 (parts of dry matter: straw and bark pieces) to 1 (part of wet matter: grass, manure). The dry matter adds carbon (C) while the wet adds nitrogen (N).

One could also add a little finished compost (as is done in the Segantini park) as an inoculator (due to the presence of worms).

We add straw again, then grass, microorganisms from the envelope (commercially available), molasses, pieces of branches, grass and then water.

The sequence should be as follows: dry, wet, dry, wet … and in between the microorganisms and water. With all this good “food” for the soil, Junior tells us that earthworms will come too.

We continue like this until the pile reaches one meter in height.

At that point, we return to our rice bran, which has meanwhile been turned into charcoal. We extinguish the fire using a lot of cold water and spread the finished charcoal on top of the compost pile. The wet rice bran will regulate the moisture and release the minerals.

The pile is covered with a black plastic to increase the rate of the decomposition process (it helps to keep it warm and humid). The compost pile will reach a very high temperature of up to 70 degrees Celsius(158 degrees Fahrenheit) during the first few days! This allows pathogens to be eliminated.

After about 5 days, Junior will turn the compost with a pitchfork, reconstituting the pile, a process that introduces air (most importantly oxygen) and will cover it again. The compost pile will be turned the same way a total of 5 times (about every 5 days).

Compost transformation will occur in approximately 1 month. If left uncovered, it would take much longer.

When the compost is ready it will be reduced by about half its initial size.

Coincidentally, that Sunday was May 9, Mother’s Day. Junior makes us notice that together we celebrate our “pacha mama” (mother earth) by making her a cake.

We bike back home, happy with a new perspective on compost, microorganisms, rice waste, and respect for the earth.