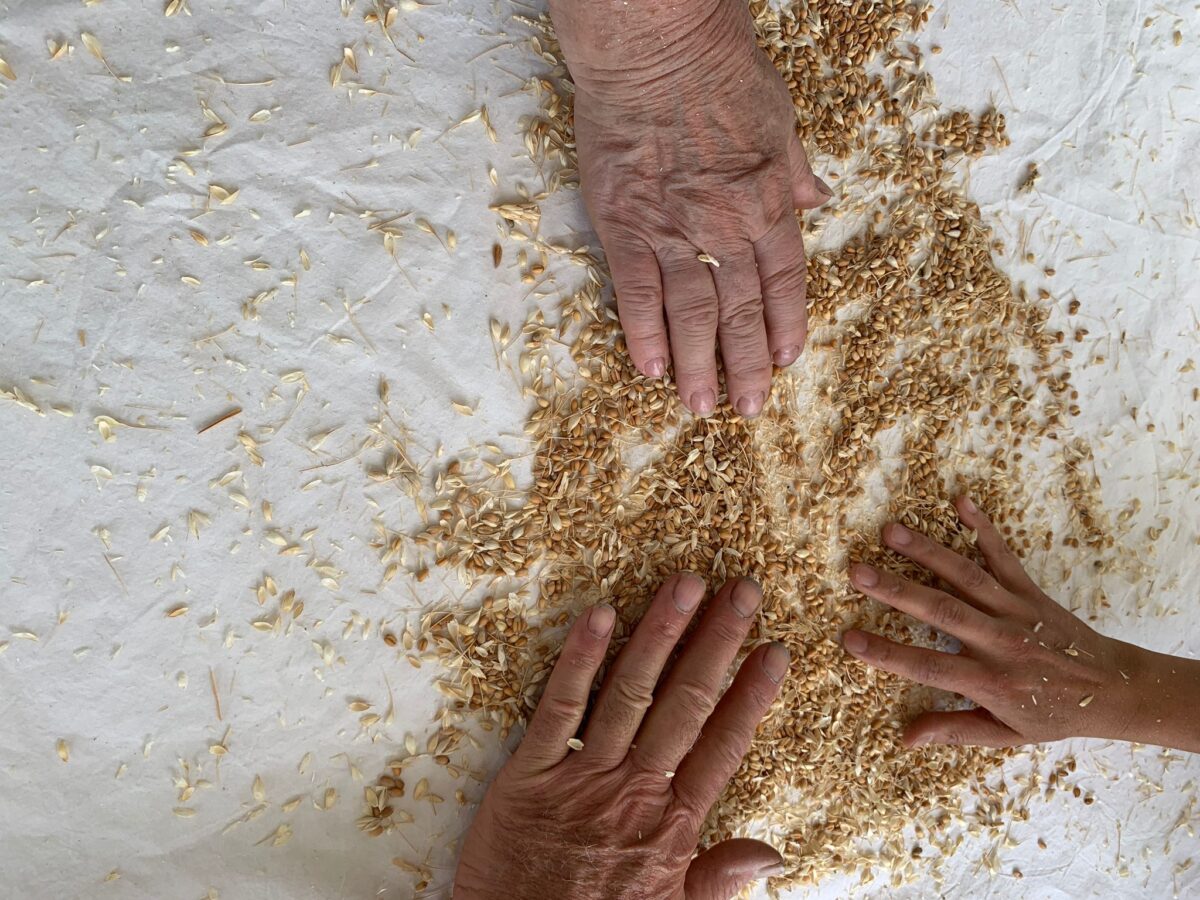 Wheat grains after threshing, the process of loosening the edible part of the grain from the straw. Foto taken at Segantinis Park in Milan, Italy.

Wheat is a very ancient cereal that was first cultivated in the fertile crescent located in the regions between the Mediterranean Sea, the Black Sea and the Caspian Sea, more than 9,000 years before Christ.

In 2020, wheat was the third most produced plant species in the world after sugar cane and corn (closely followed by rice).1

Did you know that 75% of the world’s food is generated from only 12 species of plants and 5 species of animals?2 Among them, wheat.

Bread, empanadas, noodles and many foods that we eat every day are made with flour that comes from wheat.

Not all wheat flours are the same. The quality depends on the production chain, meaning, the type of seed, the type of agriculture with which it is grown, the health of the soil and the way the grain is milled.3

Wheat, known in Latin as Triticum, is a plant from the same family as rice, rye, barley, and oats.

In Italy where I live, about 2,000 varieties of wheat are known; but only a few are cultivated on a large scale. 4

Soft and hard wheats are very similar on a structural level but different from a nutritional point of view and uses. They grow in different environments; hard wheat tolerates hot, sunny arid soils while soft wheat prefers a fresh and more humid climate. Hard wheat flour contains more proteins and gluten than soft wheat flour and has a greater water absorption capacity. Products prepared with hard wheat flour have better conservation and a lower glycemic index.6

The soft wheat grain breaks easily and is opaque, rounded and crumbly. The flour obtained from the grinding of soft wheat has a good extensibility and a medium-low toughness. It is usually used in the production of bread, leavened products (cakes, biscuits, pizzas) and fresh pasta.6

On the other hand, hard wheat grain is really “hard”, has a slightly more elongated shape and is almost translucent. The flour obtained from hard wheat is rough and is yellow-amber in color. The dough obtained from hard flour has a lower extensibility than the soft flour but a high tenacity, which makes it good both for making bread and for the production of pasta.6

Do you know how many varieties of wheat are grown in your country? Is enough wheat grown to meet your country’s flour needs? Is wheat imported? Is flour imported? From where?

Now that we know a bit more about wheat, I will tell you a story of a seed that became pasta.

From the seed to the noodles
Part 1: Seeding

Everything starts from the seed, which in the case of wheat is part of the plant’s fruit.

The seed is the baby of the plant and to grow healthy and strong it needs a living soil rich in nutrients (see article V.I. S. ((Very Important Soil)), water and clean air.

For the sowing we use the soft grain that comes from Cascine Orsine, a farm in the province of Pavia (approximately 30 km away from the Segantini park in Milan) that cultivates using biodynamic agriculture. Andrea, the owner of SoulFood, the restaurant close to the park where we did the Macambo event (see article Macambo as a solution. Chapter 1: The proposal), got me the seeds for this experiment.

Wheat likes cold weather. In northern Italy, it is advisable to sow it 6 weeks before the first hard frost. We sowed in mid-November.

We planted the wheat in 2 beds measuring 5 x 5 meters (total 50 square meters (m2)) in Segantini Park, a park in the city of Milan in Italy. In the first bed, clover, a plant that fertilizes the soil, has previously been planted. In the second bed, we decided to make an mixture of both wheat and broad beans.

Before seeding, we prepared the soil; we removed weeds and fertilized one of the beds with compost and a little manure.

We sowed approximately 30 g of seeds at a distance of about 12-13 cm, making shallow holes to introduce the seeds. The recommended depth is twice the size of the seed so that it can come out without problems but at the same time is protected.

We put 4 seeds in each hole because we were not sure how many plants would sprout.

Finally, we watered gently (similar to a light rain) so as not to disturb the soil and waited for germination 🙂

In the following days, we controlled the ground humidity (so that it would not dry out) and the temperature. During this time, we followed two important actions; if it was very dry, we watered it and if it was very cold, we covered the ground.

In both beds the wheat grew very well and in June it was ready to be harvested.

In April, with great care not to damage the wheat, the broad beans were harvested. Interestingly, in the bed where the clover was, a lot of poppies grew.

The manual harvesting of wheat is called reaping. Using a sickle, we cut the base of the wheat stalks with fast and determined movements.

Then, we cut the spikes from the stems and put them in a cotton bag.

To free the grains, we hit the bag against the table and rubbed the spikes inside the bag using our hands. Then, with the help of a fan, we separated the bran from the wheat grains.

The process of loosening the edible part of grain (or other crop) from the straw to which it is attached is known as threshing. Did you know that in ancient times animals like horses were made to run over the ears of wheat to release the grains? Here you can see a video showing it.

This may seem like very hard work, but if it is done in company, it is fun!

To grain the wheat grains we used a small electric stone mill. Little by little, preventing the mill from overheating, we transformed almost 1.5 Kg of grain into flour.

Using a sieve, we started by separating the bran from the flour but later decided that we would only have a whole wheat flour. We only removed the very big pieces.

Part 4: Preparation of the noodles (pasta)

Italy is famous for its fresh pasta, so with friends from the park, we decided to prepare a dish of pasta with tomatoes puree, eggplant and goat cheese.

To prepare the fresh pasta, we used 1 egg (or the liquid equivalent of 1 egg) for every 100 g of flour.

We prepared 700 g of flour using 7 eggs donated by Claudio’s hens. Then, we kneaded the mixture creating a homogeneous dough. As the dough was too dry, we needed to add more water.

We let the dough rest for an hour (an essential step in the preparation of the pasta).

Then, using a pasta making machine, we made tagliatelle (wide flat spaghetti) that we cooked in abundant salt water.

For the garnish, the aubergines were first dehydrated with plenty of salt. Then they were washed, passed in flour and fried in abundant hot oil.

The tomatoes were cooked and then passed through a manual tomato press where the skin and seeds were removed (it can also be blended).

At the end, when the pasta was ready (al dente), the fried aubergines, olive oil and grated goat ricotta were added. A treat!

If you are wondering if it was worth all the hard work to eat a plate of fresh pasta, the answer is YES!! All the steps were fun and the taste was delicious!

I cannot say that the taste is better than other fresh pastas made with quality raw materials found on the market or eaten in restaurants that value the origin of the products. But I am sure that seeing the wheat grow, process it and prepare the pasta is an experience that gives the dish an important additional value also in terms of flavor. If you can, give it a try!

The experience of making pasta starting from the seed was a complete success! We decided to seed wheat again this year, this time at the end of October. Who knows, maybe it will become a park tradition?